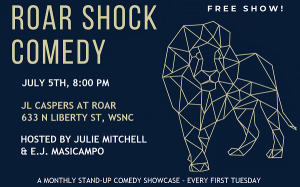 Roar Shock Comedy is a free monthly stand-up comedy showcase at the Roar Entertainment Complex. Join hosts Julie Mitchell (Vice, McSweeney’s) and E.J. Masicampo (Vail Comedy Festival, North Carolina Comedy Festival), who will be welcoming top comics from across North Carolina. The show will take place in JL Casper’s, which is one floor up from the Liberty Street entrance. Food and drinks will be available for purchase during the show.