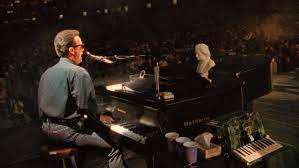 In celebration of 50 years of Billy Joel, one of the most iconic concert films of all time, “Live At Yankee Stadium,” is coming to cinemas for a special two-night global fan event. Shot live on 16mm color film on June 22 and 23, 1990, at the iconic Bronx stadium, the original concert has been re-edited in stunning 4K. The new version includes a never-before-released performance of “Uptown Girl,” interviews with Billy Joel, and behind-the-scenes footage from the event’s production.