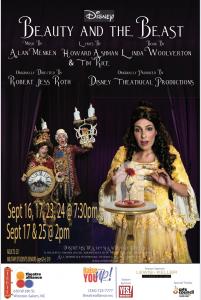 Join Theatre Alliance for this classic Disney hit, with fun for the entire family!

The mission of the Winston-Salem Theatre Alliance is to inspire, transform and unite the people of the Triad through a broad range of unique, diverse, and unconventional theatrical experiences.

The Winston-Salem Theatre Alliance was founded by director Fred Gorelick in 1983. Gorelick, who taught advanced acting classes at the Little Theatre of Winston-Salem at the time, began producing “showcase” productions to show his students’ work to the public. His tireless energy and tenacity resulted in a permanent functioning theatre, the Winston Salem Theatre Alliance.

Theatre Alliance was incorporated as a non-profit 501(c)(3) corporation. The first production was “The Royal Family”, performed at the Reynolda House, followed by “Crimes of The Heart” at Wake Forest University. Other shows in the 1980s included “The Real Thing”, “House of Blue Leaves”, “The Crucible”, and “True West”.

Fred Gorelick’s departure from Winston-Salem in 1990 did not herald the end of the Theatre Alliance. The company continued to produce shows on an occasional basis, with volunteer directors taking the task of both directing and producing shows.

In the 1990s, Michael Huie was appointed Artistic Director of the Theatre Alliance, and held that title until 2001. The seasons became more ambitious as well. Musicals like “Nunsense” and “Pump Boys and Dinettes” joined serious dramas (e.g., “Burn This”, “The Heidi Chronicles”, “The Children’s Hour”) and uproarious comedies (e.g., “The Complete Works of Shakespeare Abridged”)

Eventually, one of the guest directors, Jamie Lawson, was asked to assume the responsibility of Artistic Director in 2001. For the first few years, Lawson relied on himself and guest directors to mount complete seasons of Theatre Alliance productions. Thereafter, Lawson assumed the responsibility of producing and directing all of Theatre Alliance’s shows. Jamie serves as current Artistic Director for Theatre Alliance and since 2001, has taken the theatre company to new heights and new spaces. Virtually overseeing every aspect of production, Jamie has carried the mission of the company to Triad audiences with his stylish vision.  In addition, the troupe began doing “By the Book” staged readings during his leadership, which are staged for free, with donations accepted for other local nonprofits.  Theatre Alliance often receives “Best of” kudos from local publications like Winston-Salem Journal, YES! Weekly, and Smitty’s Notes, thanks to a loyal and dedicated fan base.

The popularity of Theatre Alliance grew exponentially in the community in the 2000s, as the group performed at least 12 diverse mainstage shows annually, which reached multiple. Productions have included a wide variety of adult contemporary comedies and dramas, smaller-scale musicals and area premieres of emerging works with wide-ranging themes. Audiences have flocked to everything from recent award-winning plays (“Love! Valour! Compassion!”, “Take Me Out”) to campy comedies (“Sordid Lives”); from contemporary stage classics (“One Flew Over The Cuckoo’s Nest”, “Hair”) to not-your-grandmother’s-musicals (“The Rocky Horror Show”, “Debbie Does Dallas: The Musical”).

Over the years, Theatre Alliance has produced shows in various venues, including the Reynolda House Museum of American Art, the Augsburg Community Center, Wake Forest University, and several years at SECCA. On the occasion of its 25th birthday in 2008, Theatre Alliance moved into a long-term rented “home” of its own in the West End of Winston-Salem, at the corner of Reynolda and Northwest Blvd, where it resided until 2021. The troupe continued to gain ground and in 2015, had to renovate from an 88-seat house to a 120-seat house at the Northwest Boulevard location, performing upward of 16-22 performances of one show to meet demand.  During the pandemic of 2020/2021, Theatre Alliance continued outdoor performances behind the Northwest Boulevard location, as well as in the parking lot of its new performance space, acquired in 2019 with the “Homecoming” Capital Campaign and with the support of the Ihrie Family, as well as from multiple other donors from all walks of life and respected businesses to cement Theatre Alliance’s scope of a true community theatre. The new venue, at 650 W. Sixth Street in the downtown arts district, plans to open in spring of 2021, after two years of relocating two scene shops, a main stage performance space, and a rehearsal room to the new location. Theatre Alliance hopes to continue entertaining its loyal fans and winning over new ones with some of the most interesting and vibrant theatre in the Triad.