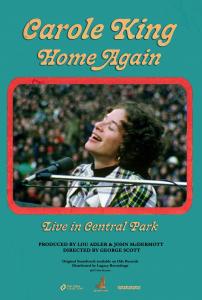 On Saturday May 26th, 1973 before 100,000 plus fans on the Great Lawn of Central Park in New York City, a generational talent singer-songwriter at the undeniable top of her game enjoyed a humbling homecoming a mere 14 miles from the house in Brooklyn where she grew up. The historic event highlighted the earth-moving power she’d unleashed with her watershed Tapestry (already being touted as one of the highest selling albums in history a mere two years after its release), all the way through her soon-to-be released song-cycle album Fantasy, (her fourth consecutive Lou Adler-produced album to land in Billboard’s Top Ten), Carole King’s performance that day was, according to Jack Nicholson, one of only two current events “proper” to be seen at in public.